An Interview with Joanne Tompkins on "The Image of Theatre"

Come see us at ATHE

My essay in Theatre Journal’s March 2019 issue analyzes gymnastic displays of nineteenth- and twentieth-century Czechoslovaks and Germans through the lens of mass performance. The essay argues that gymnastic training and performance techniques parallel shifts in the socio-political conception of the people in the age of mass politics. I demonstrate how small groups of dispersed people seeking unity through synchronized movement end up forming units of power ultimately adopted and adapted by totalitarian political leaders.

The essay draws on research for my upcoming book, Mass Performance: Systems and Citizens. The book creates a category of thought for mass performance, which I define as a thousand or more people performing the same activity at the same time. I focus on how the power of synchronized mass movement has been recognized and systematized by ruling powers in the era of nationalization.

German and Czechoslovak gymnastic movements, called the Turners and the Sokols, respectively, serve as paradigmatic examples of a vast modern phenomenon that, while largely forgotten today, was wildly popular from the early nineteenth to the mid-twentieth centuries. Thousands of citizens would train for months or years to perform physical and vocal actions together, in synchrony, on a field for sequences that lasted an average of twenty minutes. The following images and videos provide further contexts for the mass gymnastics craze, and hopefully help to convey—however distantly and inadequately—their contagious dynamism. 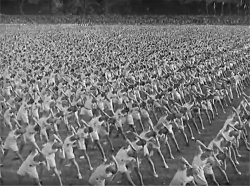 Germany developed mass gymnastics from Jahn’s Turnverein (1811) on through the National Socialist displays of the 1930s and 40s. Looked at alongside images of mass gymnastic displays such as those of the Sokols, the lines of mutual influence are clear, in both technique and type. One distinct feature of mass performance in totalitarian regimes is the focus on a single leader appreciating the performance, something not emphasized in pre-totalitarian displays of Czechoslovak or Turner mass gymnastics, but clearly seen here with Hitler. 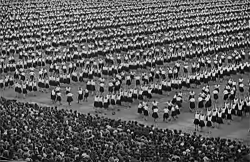 Sokol Slets (mass displays) included parades, dances, performances of regional dances, and, of course, mass gymnastic routines. A certain inexactness of movement and playfulness among the performers can be seen in videos of Sokols, qualities that disappear in the later communist-led Spartakiads. 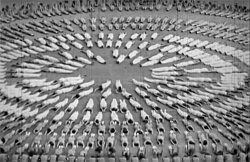 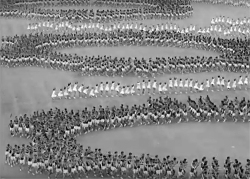 Six thousand girls and boys perform in a sequence at the Spartakiad. Strahov Stadium, Prague, 1955.

Spartakiads developed challenging routines for children, which became a staple of all subsequent mass gymnastic performances. 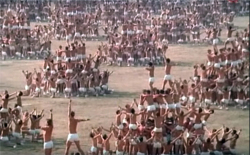 The “Fireworks” sequence of the communist Spartakiad, 1980. Strahov Stadium. Prague, 1980.

Thousands of young men throw themselves from the top of human pyramids, so that, from the stands, their combined leaps resemble the dynamic and dangerous bursts of a fireworks display. This sequence was in fact perilous, and confidential reports detailing that year’s injuries (concussions, broken bones, spinal fractures, damage to inner ears) circulated among officials after the Spartakiads.

The power of co-ordinating the gymnastic energy of a people appealed to totalitarian leaders throughout the twentieth century. They got ideas from each other’s mass performances and implemented them at home (if they were able to muster the resources). Nicolai Ceausescu was impressed by the mass performance Kim Il-Sung produced for him, as can be seen in this footage.

The influence of the modern revival of gymnastic culture, and its systemization into a genre of mass performance, can be seen today in the mass performances of North Korea. Children and young adults train for months and years to participate in what the state calls “mass gymnastic and artistic performances,” including, but not limited to, the famous Arirang performance, created in 2002 and performed annually, with one interruption, until 2013. The format of the “Grand Mass Gymnastics and Artistic Performance,” developed for Arirang, was revived in 2018 for the performance of “Glorious Country.”

Systems of mass performance began with small groups of people seeking social strength through physical coordination, but they flourished in totalitarian regimes. My essay in Theatre Journal traces the massification of coordinated group activity from children voluntarily exercising together on the German Hasenheide to thousands of people trained by a centralized government to move together in time.

Kimberly Jannarone is professor of theatre arts at the University of California, Santa Cruz. During 2017–18, she was the Archie K. Davis Fellow at the National Humanities Center working on her book Mass Performance. She has been a visiting professor of dramaturgy and dramatic criticism at the Yale School of Drama and a Beinecke fellow at Yale Repertory Theater. Her books include Artaud and His Doubles (2010; honorable mention, Joe Callaway Prize for best book in drama) and Vanguard Performance Beyond Left and Right (2015), both by University of Michigan Press. She directs experimental performance and has co-translated, with Erik Butler, works by contemporary French playwrights.